Had another practice - the equivalent of 12-14 overs. Again only using 6 balls. Venue the paddock. Objective - accuracy and spinning the ball hard.

Yeah, a lot more positive than yesterday, a definite move forwards with some positive observations relating to the things that I tried.

The good thing was with the additional focus on accuracy, it seemed to work really well. In addition my Googly is coming together - very accurate with loads of top spin a lot of the time. Bad stuff - for some reason irrespective of what delivery I chose at the start of the over, a lot of the time it ended up very wide down the legside.

The way I'm practicing this season is to use a mat, we started to do this last year, but since then I've looked at a few things and realised that one of the really important things is the length. In the nets over winter and at training I come up against some very good batsman who are able to read the spin, but if the flight combined with the length come together it leaves them in two minds. So the focus is to land the ball in a specific area. The point of reference for the ideal length comes from information that batsman have suggested 4-5 yards from the stumps and this is confirmed if you watch the IPL when the spinners are bowling their pitch maps have a 'Good length' defined as 4 metres.

The area that I spin into is relatively large, again there's some debate about this, spinners such as Grimmett and Benaud talk about being able to land the ball onto very small areas, but I reckon that if you're pursuing this discipline and you stick to that idea, you're going to get very despondent. It might be a target to aim for in the much longer term e.g. when you've been bowling this stuff for ten years or so, but when you're learning something akin to what I'm doing here I reckon is a good start.

Confirmation of the idea that a big target is acceptable, can be found here (Click on the image) and watch it at about three minutes in. This is Terry Jenner, Shane Warne's mentor. 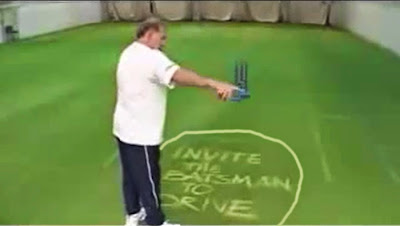 ﻿
Recently I've noted that when I bowl with loads of balls I don't take it as seriously as I should do, as there's always plenty of balls in the bucket to bowl correctly next time and it seems I get really sloppy. So now I go out with just six balls looking to bowl really well from ball 1 and trying to make every ball count. The fact that I then have to walk down the other end and gather all the balls together almost recreates the time gap that occurs as the other blokes over takes place. We never bowl more than six balls at a time and therefore our rhythm is disrupted and I feel that it's important to recreate this when you're practicing.
So today I set up the mat initially so that line was as below... 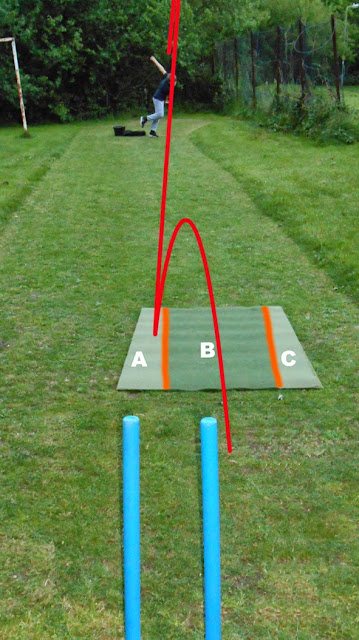 When I do this I pre-allocate points to each strip. So on this occasion I've said that landing the ball on 'A' scores me 3 points, the ball on 'B' scores 2 points and 1 point for 'C'. Hitting the stumps in addition scores an additional point. The mats as mentioned previously is on that 'Good length' the centre of the mat is at 4 yards, so the more I'm able to bowl onto the mat, the more it becomes to feel natural to bowl that length. The drill can obviously be changed in order that you bowl fuller or shorter and this again stretches your abilities.
So the first half of this evenings session was with this configuration trying to bowl at the stumps which in theory would draw the batsman forward to defend or drive the ball, or get him skipping down the wicket. So as I'm bowling I'm also trying to change the speed and flight and get more over-spin in order to get the ball to dip more rapidly. All these subtleties, still require the ball to land on the mat.
Initially I didn't score that high, the balls were too full and I didn't have any way of recording the points. In addition the amount of spin I was getting with my Leg Breaks meant that all of the balls were missing the off-stump by a mile. So then I changed the mat position to the one below... 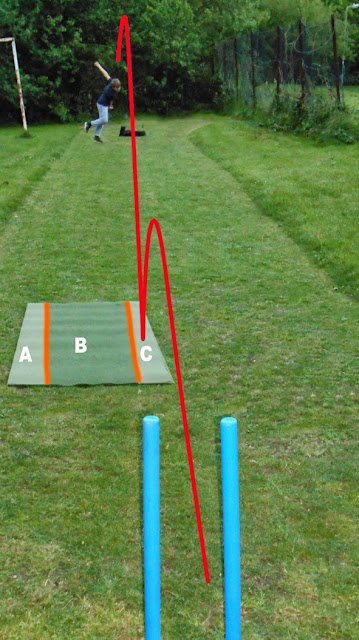 With the ball turning so much I was then able to focus on getting the ball on the 'A' line attempting to turn it into the stumps and this was a lot more successful. Hitting the 'A' line coming around the wicket at the other end for some reason was a lot easier. My top-spinners were very accurate too and these look as though will be a key feature of my bowling at the start of the season. If they work as well as I'm envisaging that'll be a big leap forwards. My Googlies again were very accurate tonight landing on 'C' and missing the leg stump by some way as well. Point-wise I scored a couple of 9's and a 10, but to be really honest and brutal I need to take a piece of paper and record my success rates and post these up on the blog maybe?
I didn't have the camera tonight and yet I bowled relatively well, it does seem as though if I've got the camera recording me I get the Yips!!!
Conclusion -
I still need to get the first over bowled well, with good accuracy, so it may be that I should bowl Top-Spinners for the first 2 or 3 balls next time and then see if the 3rd or 4th ball as a leg break produces a better result? The first ball of several of the overs went way down the legside irrespective of whether I bowled around or over the stumps and I need to explore this. It may be that I'm still just be sloppy?
Action plan -
Bowl tomorrow night using the same approach. Record what I do and the points scored. Position the mat slightly differently and bowl over the stumps. Have the 'A' strip slightly wide of leg and have that as the '3 point' target. Bowl with more over-spin. Bowl some overs with a top-spin priority and adjust and record the target strip.
If you're looking for more info and ideas about Wrist Spin Bowling - check my Leg Break bowling page out here. http://mpafirsteleven.blogspot.co.uk/2014/12/wrist-spin-bowling-leg-break.html
﻿


Posted by Someblokecalleddave at Monday, May 04, 2015